Dark Patterns by the Boston Globe

After years of falling revenue, some newspapers have resorted to deception to boost their subscription numbers. These dishonest tactics are sometimes called “dark patterns” – user interfaces designed to trick people.

For example, this is a Boston Globe story on Bernie Sanders:

Before you can read the article, there is a pop-up ad asking you to subscribe. By itself, this is annoying, but not deceptive. The real dark pattern is hidden at the top – the ‘Close’ button (circled in red) uses a very low contrast font, making it hard to see. It’s also in the left corner, not the standard right corner. This makes it likely that users won’t see it, causing them to subscribe when they didn’t have to.

One the ‘Close’ link is clicked, deception continues:

At the bottom, there’s a non-removable, high-contrast banner ad asking for a paid subscription. Again, this is annoying, but honest. However, the circled text “for only 99 cents per week” is not honest. It’s simply a lie, as later pages will show.

Clicking the “Subscribe now” button brings up this page: 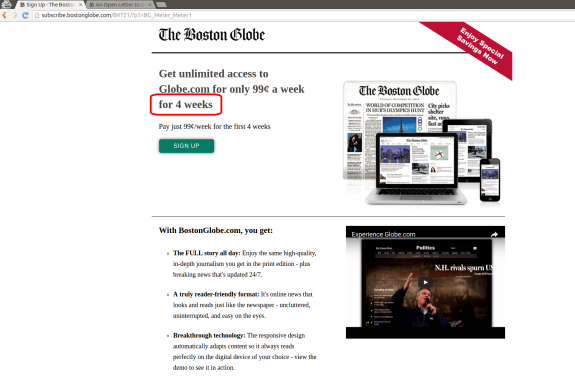 Here, it becomes obvious that $0.99 per week isn’t the real price. It’s common for companies to have initial discounts, which isn’t itself a dark pattern. The problem on this page is that the real price is never stated. This misleads the consumer.

Clicking the “Sign Up” button reveals yet more dark patterns: 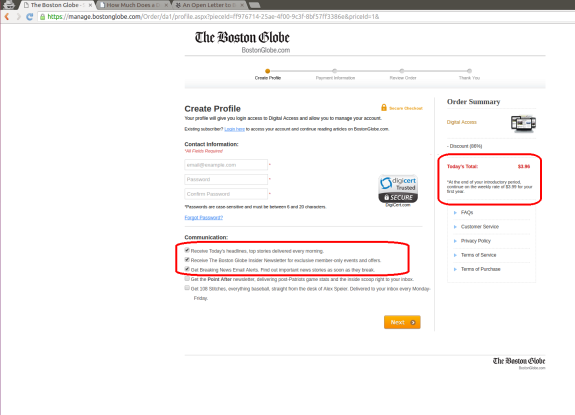 This is the first signup form. It shows the amount charged, but only for the first month ($3.96). The real price is below that, in smaller font, and made less obvious by the red highlighting on the previous line. At first glance, it looks like the same price ($3.99), but the real rate is actually $3.99 per week, while the number in red is $3.96 for the entire month. In addition, in the left column, three of the marketing email signups are checked “yes” by default, so people will subscribe without noticing.

The next page is pretty similar, it’s a standard credit card form: 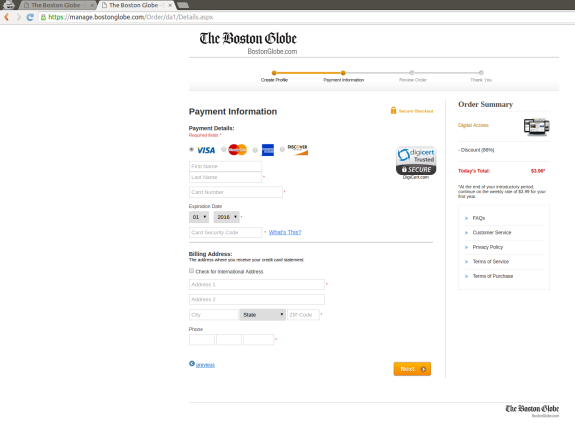 And this page is the last one you see before ordering:

It isn’t visible, but this page is yet another dark pattern, because even right before the purchase it never shows the real price. To find the real price, one must click the little “FAQs” link on the right:

Then, hidden among questions about crosswords, obituaries, and horoscopes, the user has to click the circled link to discover: 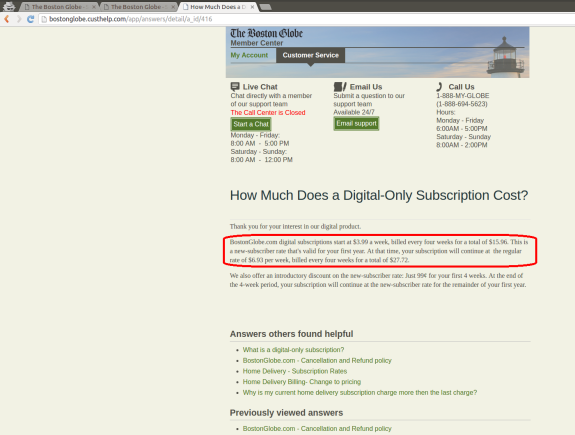 Yes, the real price isn’t the $0.99 per week in the banner ad, or even the $3.99 per week in fine print on the purchase page. It’s $6.93 per week, almost twice as much as the purchase page rate, and seven times as much as the banner. Since this price only kicks in after a year, it’s almost impossible for average users to notice, unless they carefully check each and every bank statement.

If they do find out and try to cancel, they’ll discover this catch, which isn’t stated or even implied during signup:

A Boston Globe reader can subscribe online. If they have a question, they can ask over email, or through a convenient live chat service. But if they want to stop paying, they have to call and ask on the phone, no doubt after a long hold time and mandatory sales pitches. There’s no plausible reason for this, other than forcing people to pay when they’d rather cancel the service.

In the short term, these dishonest tricks raise revenue for newspapers that use them. But in the longer term, they do even more damage, by giving the whole industry a reputation for bad business practices. Cable companies can get away with it because of government-granted monopolies; newspapers won’t be able to.